Shortly after graduating from college, I moved across the country to Catalina Island, twenty-six miles off the coast of Los Angeles, for a job as an instructor at the Catalina Island Marine Institute. During that time (early 90’s), I can remember learning a bit about the large-scale effects of ocean currents on marine debris. Several years later, researchers discovered what would become known as the Great Pacific Garbage Patch – a growing mass of floating trash collecting within the ocean as a result of converging currents. In the years since then, I’d admittedly lost track of this issue.

Recently, while doing a bit of research before creating this informational graphic (below) to accompany an article in Environment California’s newsletter, I was shocked to learn how immense we’ve allowed this “patch” to grow – twice the size of Texas! 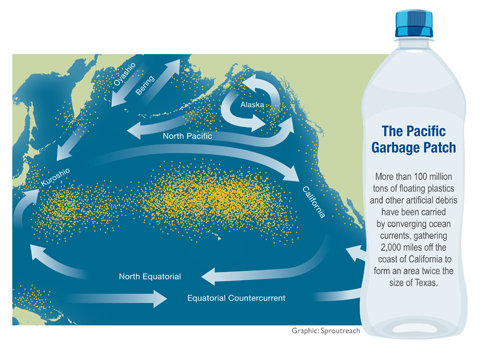